There’s a great deal to see in Greenwich Village.  Having done numerous two-hour tours of the Village, I’ve found it’s impossible to see everything noteworthy in that short span of time.  There’s just so much.  And there are two Villages, when you think about it.  The East Village and the West.  Though, when someone talks about ‘The Village” they generally mean the central Village or central and West Village.

If you start at Washington Square and go south to see The Bitter End, on Bleecker, where everyone from The Kingston Trio to Stephanie Germanotta (Lady Gaga) have played over its 60+-year span, you’re moving away from Electric Lady Studios on West 8th, where Jimi Hendrix recorded.

The Village has four good chocolate shops that I know of; lots of great bars and restaurants, sidewalk cafes, shopping and nightlife.

It also has great wildlife.  I’m not talking about beer-guzzling drunks caroming off walls as they amble down the street – though those are out there too — but actual animal wildlife.  As a matter of fact, you can see this live before you even make the trip here.

Looking out a window of the top floor of New York University’s Bobst Library is the New York Times’ Hawk Cam:

Every year, a pair of red-tailed hawks build a nest in the ledge of the window of NYU’s president’s office.  They lay an egg or two in March.  Chicks hatch in April.  By June, the chicks are fledged and flying on their own.  And hunting.  The rest of the year, you can look in on the Hawk Cam and occasionally see a hawk dismembering its latest victim, usually a pigeon or a rat. 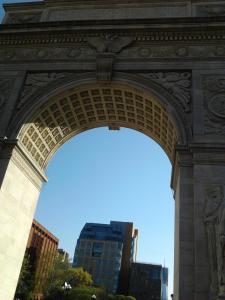 See the reddish building low on the left, through Washington Square Arch?  That’s the Bobst Library.  The President’s office is one of the row of windows along the top.

Now, let’s say you want to see this wildlife personally, without aid of the HawkCam.  When you come to New York, go to the Arch in Washington Square Park; it’s on most tourist maps.  Then walk through to the center of the park.  Slowly scan treetops and nearby rooftops.  There’s a good chance you’ll see one of the red-tailed hawks surveying the grounds, looking for its next meal.